(Don't) Stay Out of the Faculty Lounge... 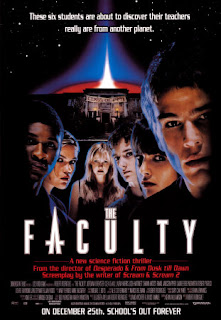 Did you ever think that your teachers in high school were aliens? Yeah, me neither. Apparently some did, though and that’s the conceit of this 1998 extraterrestrial extravaganza. What if they really were aliens, body snatchers style, taking over the town one drone at a time? Of course because you’re just a teen, no one believes you. It’s up to this misfit Breakfast Club to save the school and the world.

Since the inception of his career, Robert Rodriguez has proven himself to not only be the epitome of DIY filmmaking, but also being a very open collaborator. He’s the kind of writer/director that would be comfortable scrapping his idea for a better one and making a movie as a team effort. Following his successful partnership with Quentin Tarantino a year earlier on From Dusk Till Dawn, Rodriguez collaborated with Kevin Williamson during the height of his popularity.

For those unaware, Kevin Williamson was responsible for the mid-nineties wave of post modern horror having penned Scream, Scream 2, I Know What You Did Last Summer, and eventually creating the massively popular television show, Dawson’s Creek (I’m so glad Joey and Pacey ended up together, they were so cute).  Rodriguez, being the team player he is thought, “hell yeah, let’s make this alien invasion high school movie.” I’m paraphrasing, of course. 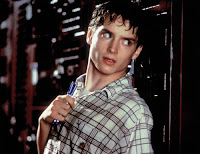 Collecting an insanely nerd and 90s friendly cast (Elijah Wood, Jon Stewart, Josh Hartnett, Robert Patrick, etc.), The Faculty is a very classically paced homage to Invasion of the Body Snatchers filtered through the self-aware lens of the era’s horror movies. At the time it was still cool to have characters comment on their predicaments with similar pop culture references. There’s even a loving rip off of The Thing’s wire in the blood scene.

By the beginning of the second act, the geeky school photographer, the new girl, the emo punk girl, the jock, and the cool, older drug dealer are on a mission to stop the school’s faculty from infesting the entire town at the homecoming game. How do they plan to do this? Well, with drugs of course.

What The Faulty lacks in originality, it makes up with pure charisma, character, and fun. The hero shifts characters multiple times throughout the story and even though these actors are portraying caricatures in an extraordinary situation, you never question their commitment or validity. The care that they give transcends the final product beyond being a rehash of horror tropes.

Rodriguez deftly handles all the characters and doesn’t make it too obvious whom will eventually save the day. There are enough hero moments to go around and there’s a point where we aren’t sure who will make it to the end. As always, his camera work benefits from him also being an editor. There is no wasted time or space on the screen, making The Faculty as easily digestible as a bucket of popcorn.

The creature effects are a touch lazy in scenes, especially the use of CGI (pretty great for only a $15 million budget, though). But, when the movie commits to a full prosthetic monster baddie, it’s completely beautiful. The fully revealed monster at the end of this is one of my favorites, especially the balletic transformation from monster to human underwater. You’ll know the scene when you see it. 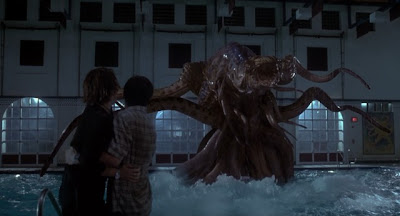 The Faculty is a fun movie that elevates itself from schlock brethren with wit, skill, and a stellar cast. Is it Laurence of Arabia good? No. But, when it comes to Rated R, high school alien invasion movies, it’s by far a favorite.

Currently available on Netflix streaming, The Faculty is a fun treat on a weekend afternoon.

Side note: One of the better (or worst) aspects of most 90s movies were their soundtracks, bloated with “hits” and covers from popular artists of the moment. For optimal marketability, they would cram tracks in every quiet moment in the movie. A-mazing. Enjoy this embarrassing little vid.